Brother Ali at the Middle East

What does it mean to be black in America when you look white? When you’re a hip-hop artist and a devout Muslim?

This past weekend, I went to check out a rapper who is all of the above: Brother Ali.

There was a line down the block to get in to his show at Cambridge’s Middle East – a good sign on a freezing, windy night that the wait would be well worth it. 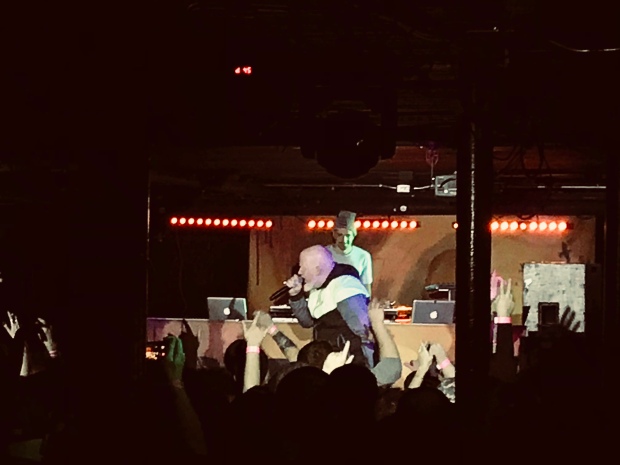 Brother Ali performed every song from his anniversary album Shadows of the Sun 15, as well as songs from several other albums.

I discovered Brother Ali while surfing the wilds of YouTube. I was impressed with his writing and freestyling skills, including on Sway in the Morning’s Five Fingers of Death Challenge.

Brother Ali reminds me a bit of Q-Tip and A Tribe Called Quest…rap pioneers and some of my favorites from back in the day. I love hip-hop lyrics and beats that tell a story and open up your mind to new perspectives.

Even though Brother Ali has a total tough dude/b-boy thing going on, he is really a family guy. He told the audience at one point that he wished he could FaceTime his son because he missed him so much, and later joked about the party atmosphere in the bar, saying “You guys are gonna get me in trouble with my imam.”

Brother Ali was still going strong, rapping and freestyling, when we left close to midnight. “I’m just getting started over here, I know it’s gonna be another $40 for the babysitter, I know, I know…” he told the audience, who didn’t seem to mind in the least.

Creating art is about making yourself vulnerable. It’s about opening yourself up, taking some of your most private business, and laying it all out there for your audience to see. When I listen to Brother Ali, I can feel that connection. I want to hear more.