Italy, no country for women

Italy is one of my favorite places on earth, but not because of the way it treats women. 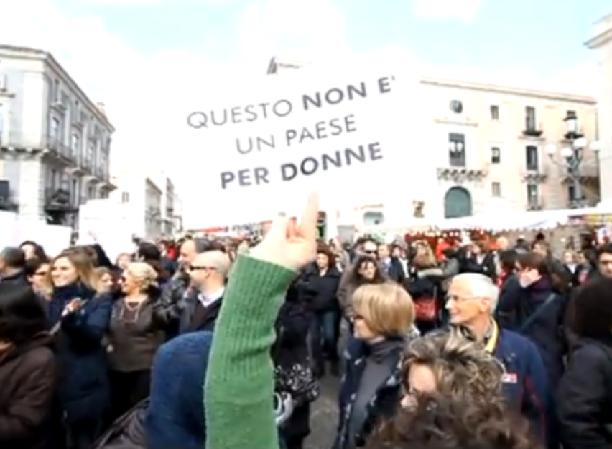 "This is not a country for women." Anti-Berlusconi demonstration, Catania, Sicily, Feb. 13, 2011. (Youtube, gaetanotorrisi)

In the late 1980s I spent my days as a student studying in Florence armed with a dinner fork in one hand—not, as one might suppose, to be ready to chow down on a bistecca fiorentina at a moment’s notice—but rather to help ward off groping gangs of young men on my way to and from school and home. It never worked. Alone or with a group, nothing we did ever kept men away from us—except other men, of course. Only when we were marked as another man’s “property” were we left alone.

Times change, but when it comes to its treatment of women, Italy does not.

As I was researching the latest Berlusconi debacle, I came across this story in the Genova edition of la Repubblica, a leading Italian daily:

Nel centro di Genova, in San Vincenzo, due passi dalla stazione Brignole, un sedere grande come una persiana , campeggia “a tutto tondo” su un cartellone pubblicitario. È partita la campagna di marketing di un marchio di abbigliamento in ventisette città italiane, ma nel grande spazio promozionale, proprio sotto il fondo schiena, c’è anche il logo del Comune di Genova. L’assessore al commercio: “Una disattenzione, ritiriamo il nostro logo” (foto di Fabio Bussalino) …loosely translated:
In the center of Genova, in San Vincenzo, steps from Brignole station, is a big ass like a Persian’s [!?!], standing out “in the round” on a billboard. It’s part of a marketing campaign by a clothing brand selling in 27 Italian cities, but in the giant promotional space, just below her lower back, there is also the symbol of the city of Genova [a flower-like design of five small circles within two larger circles]. The commercial assessor says: “An oversight, we will take back our city’s logo.”
Contrast this image with that of hundreds of thousands of protesters across Italy last week, calling for the billionaire media mogul and Prime Minister Silvio Berlusconi to step down after he was caught paying for sex with an underage 17-year old nightclub dancer and then tried to cover it up. (Prostitution is legal for those aged 18 and up in Italy; pimping and brothels are not).
Some of the signs included: “BASTA” (Enough) and “This is not a country for women” and “Join Murbarak and LEAVE”.
Here is a video with English subtitles from the demonstrations in Rome:
Upon learning that Berlusconi would stand trial by three female judges, his lawyer Piero Longo said: “Great. Women are always appreciated, sometimes even agreeable.”
Let’s hope the women judging Berlusconi this time won’t be so agreeable.

← Egypt, Mother of the World
the peculiar and fantastic art of Edward Gorey →

3 thoughts on “Italy, no country for women”