When you don’t have the money to hire a publicist or a lobbyist and you still want to make yourself heard, you hit the streets—or set up tents and occupy a symbolic place of power. The sit-in has become a tent-in.

The Occupy Wall Street movement landed in Boston last Friday. Growing in momentum and spontaneity in cities across the country, the movement’s Boston branch has been well-organized and peaceful. Police hover along the periphery of the camp, but haven’t interfered with people holding signs along Atlantic Avenue, cars honking in support as they drive past. 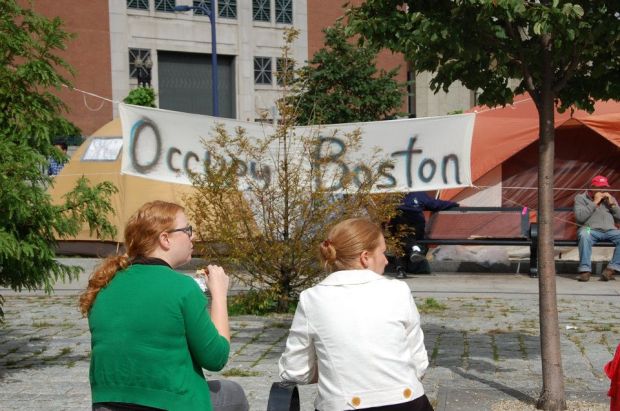 One of my clients is around the corner from the Federal Reserve building, so I walked over there on Monday and Tuesday to visit the camp and chat with the protesters. The people I met were male, young (20 & 30-somethings), under-employed or unemployed, veterans, students, ironworkers, and electricians. They are upset about the lack of work and opportunities for their generation, which they see as a symptom of the country’s growing social and financial inequalities, symbolized by Wall Street bailouts and the mysterious machinations of Federal Reserve. 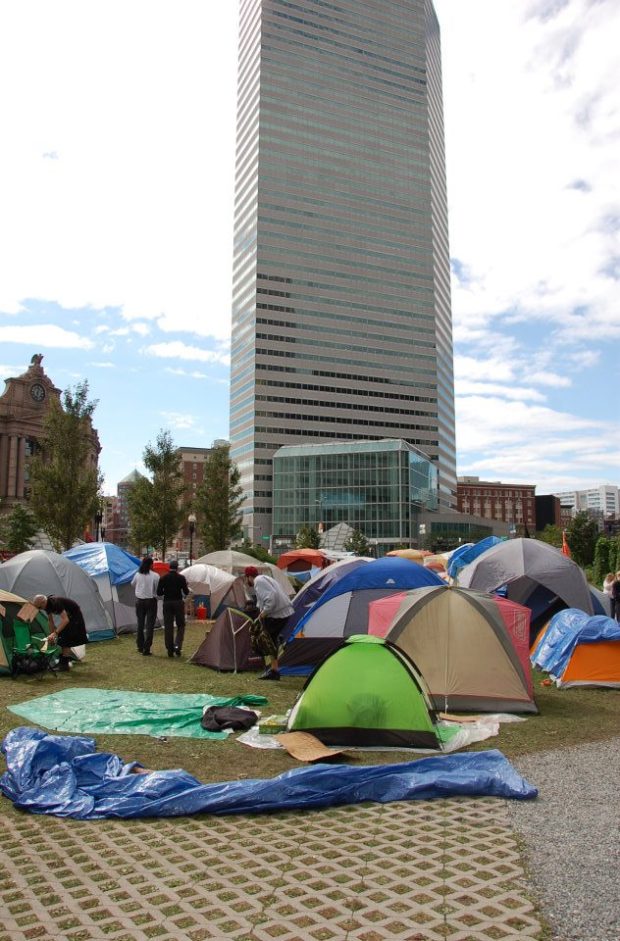 Tents sprout up among the skyscrapers. South Station is on the left. Occupy Boston, Oct. 3, 2011 (photo: Julie Miller)

Thanks to lessons learned at Occupy Wall Street in New York, the tent city is carefully set up and clean. There is a mail table. Walkways made of wooden pallets and cardboard keep mud and dirt out of the tents. There are recycling and composting areas, and tarps cover clean and dirty laundry areas.  There is a medical tent, a legal tent and a media tent, where you can go to speak to someone “official,” located near precious electrical outlets. The Greenway, the owner of the property, has donated electricity for the media tent’s monitors, laptops, and microphone. There is a covered area for bottled water and food donations.  A table, staffed with greeters and stocked with pamphlets and other literature, sits near the entrance of the encampment. 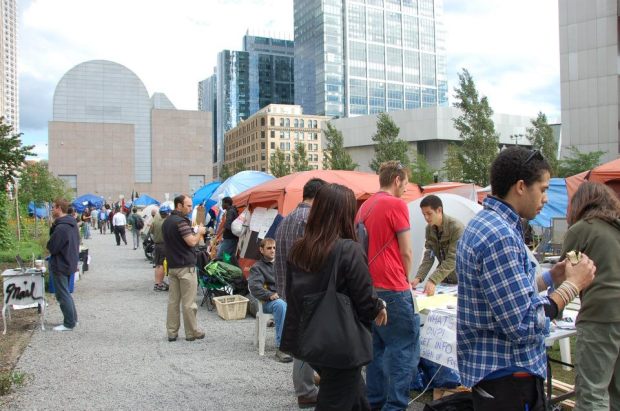 Nick DeTellis, 29, volunteers at the medic tent. A retired Army Sargent who served stateside, Nick believes that “Left, right, and center, we’re all upset about the same things,” he said. “We’re trying to spread a unifying message, but yes, people still don’t know what we stand for. That still needs to be articulated, and it’ll be worked out. I’m not claiming to speak for the movement, but Anonymous published a list of demands—I support that,” he said. There is an amorphous list of demands on the OccupyTogether site; you can check out photos, videos and more at OccupyWallStreet.org, and our own home-grown movement has set up the website  OccupyBoston.com and Twitter feed @occupy_boston.

Another veteran, Ryan Cahill, 26, served two tours in 2005 and 2007 as a Specialist in Iraq. He studies finance at Bunker Hill Community College and wants to use his degree in part to help low-income people learn how to manage their finances, save, and invest. Divorced and with a house about to go into foreclosure in Miami, Ryan supported Ron Paul in ’08 and is hoping that the protests will help bring about more accountability and openness in our financial system and at the Fed in particular. He’s also concerned about the high rate of unemployment among vets, which now stands at 16%, almost double the national average. “Even though I served my country, my bank refused to work with me on [adjusting] my mortgage,” he said. “Being a student of finance, I’m actually not that interested in finding a job that helps maintain the system as it is now. But I am interested in the stock market and how markets work in general. I also eventually want to get my CFA and maybe start my own fund someday, [one] that invests in progressively focused companies.”

An ironworker from Charlestown and an electrician from Boston were chatting on the edge of the camp when I walked by yesterday. What do you say to people who think you should spend more time looking for work and less time protesting, I asked them. The ironworker bowed his head and pointed to his baseball cap, which had “Ironworker Local 7” embroidered on the front. “I’m here because I can’t find a job. I’ve been looking for a long time now,” he told me. “Look at the city skyline—there’s no cranes. No cranes means no work. There’s nothing out there for me right now. When I found out this was happening I put my tools down and came here to be a part of it.” His two brothers are in the military and also plan to join him at the protest when they’re finished with their tours—and so do their friends, he added.

The main goal of the Occupy movement, at least for now, seems to be to engage in a dialogue with all types of people (including office workers and bankers in the financial district) across the political spectrum, and to raise visibility and awareness, which is the first step toward changing the status quo. Occupy Boston plans on being in Dewey Square for at least a month, maybe more. Stay tuned, and if you’re in the area, stop over and check it out. 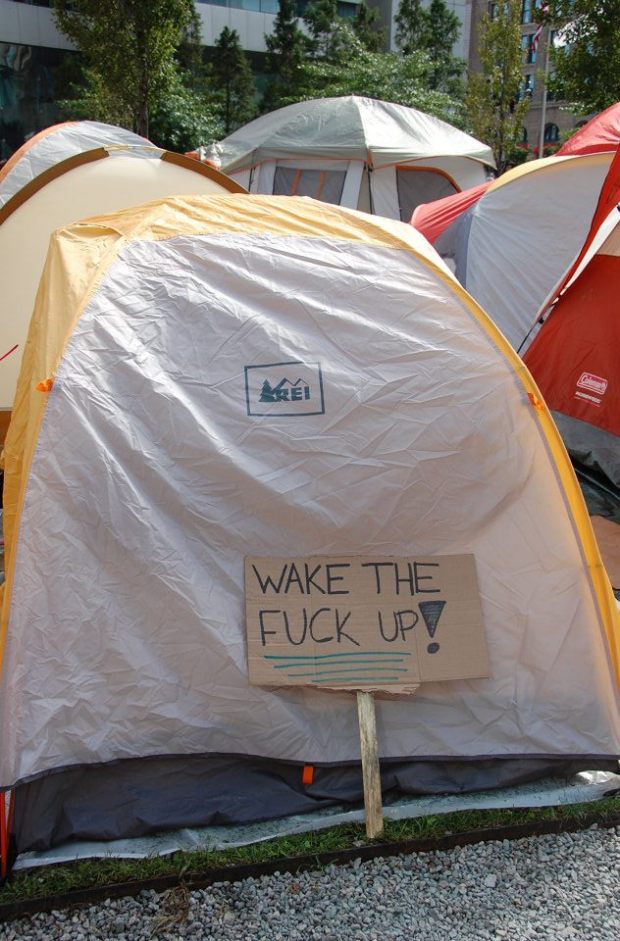 ← Interrogating the Interrogator: a conversation with Glenn Carle
on working in America →