It’s easy to be fashionable when you have money; when you don’t it takes resourcefulness, knowledge, and street smarts.

At this stage in my life, I have plenty of everything, which is why I like to shop my closet before I buy something. If I do have to head out to the shops, I try to buy what I need used, or secondhand, first. Save the planet!

I don’t have a competitive bone in my body, but consignment and thrift shopping is a blood sport for me. Maybe it’s a cultural/New England Yankee thing, a pride in getting something of quality for a great price, in recycling and reusing, in not letting things go to waste. 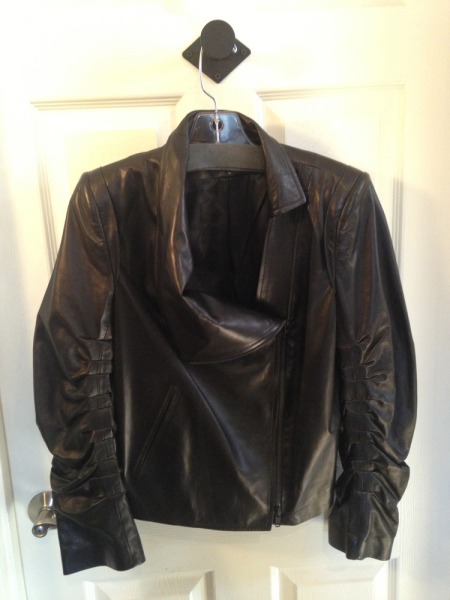 The trick is to find a thrift shop or consignment boutique that you love in a wealthy, upscale area.

At the risk of creating competition for things in my size, my two favorite consignment shops are Redress Boston, (“wardrobe atonement on a budget” – click here to read their witty blog by Redress’ Nicole Coakley), and Designer Consigner in downtown Hingham Center. STA and The Closet are also pretty good.

I’ve had fun eavesdropping on the drag queens in the dressing room at the Buffalo Exchange in Allston.

I suspect I will soon succumb to the siren song of super-upscale Kiki D Design & Consign in Newton Center…it’s only a matter of time.

You want me as your wingman at that sample sale: I snag the sweetest deals, thanks to my shopping sixth sense, strengthened by years of self-taught fashion training.

As a child, I pored over copies of Vogue, Elle and Seventeen magazines (with the occasional Esprit catalog thrown into the mix), until I could spot an Alaia from a Valentino from a distance in three seconds or less. This was well before models succumbed to fake breasts and rampant airbrushing. I developed an acute fashion sense along with just a touch of dysmorphia.

The Unitarian Church in the Massachusetts town where I grew up (nicknamed Deluxbury) had epic secondhand clothing sales in the ’70s and ’80s. They would be twice a year, and we would line up early on the steps waiting to get first dibs on the best threads. I’ll never forget the time I nabbed a like-new tomato red Halston dress for $10.50. Score!

the fabulous Sheila Johnson, my one-time neighbor, babysitter AND one of the first African American models to make the cover of Vogue, 1980. (photographed by Patrick Demarchelier; etsy.com)

I spent many a Saturday at Filene’s Basement (the real one in Boston’s Downtown Crossing), where my mom and I would wear leotards so we could try things on by stripping down in the aisles. If there were any changing rooms, I don’t remember them; maybe we felt they slowed us down.

My mom taught me how to hide things in a different section of the store so they’d be there after the markdown date. She also taught me it’s better to grab first, then sift through a big pile later. In the cashmere-eat-cashmere world of discount shopping, you don’t get a second chance to have it first.

Nowadays, I like checking out blogs like The Sartorialist and the Fashion & Style section in the New York Times for inspiration. I still love Vogue, plus Vanessa Friedman’s column in the Financial Times (her FT blog “Material World” is here) along with FT’s How to Spend it/a Passion for Fashion magazine supplements, which are lush and awesome.

I smiled when I saw the headline, because I recently purchased an Eileen Kramer crocodile bag at Redress:

As millions of Americans choose simpler, downsized lives—opting for city living, bicycling and tiny houses over McMansions, suburban commutes and malls—buying and selling used clothing and gear has become a big business.

There’s a lot less stigma associated with wearing used clothing than when I was a kid. Consignment and used clothing stores have gone national, like the chain/franchise Buffalo Exchange. The start-up thredUp.com is a popular and fast-growing online consignment shop for kids’ clothing that raised nearly $8.5 million in its first round of  VC funding in 2011.

New, cheap fashion from places like H&M and Forever 21 comes at a heavy cost for our society and our environment. Low-cost fashion spews massive amounts of carbon dioxide into our atmosphere, generated by manufacturing and shipping poor quality clothes that aren’t designed to last. People and children work in terrible conditions for low wages. Suddenly that $9 sundress doesn’t look so good.

In her 2007 article “Waste Couture: Environmental Impact of the Clothing Industry,” Dr. Luz Claudio writes about the impact of globalization on the ready-to-wear industry and its effect on the environment, concluding that “Consumer awareness about the fate of clothing through its life cycle may be the best hope for sustainability in the fashion industry.”

Our penchant for what Elizabeth L. Cline calls “disposable clothing” in her 2012 book “Overdressed: the Shockingly High Cost of Cheap Fashion” is behind her call for a new “slow fashion” movement (inspired by Italy’s “slow food”) where we “make, alter and mend” before mindlessly shopping for more and more stuff.

While well over half of the clothes we recycle are shipped overseas, there’s still plenty of clothing, shoes and accessories getting a second life here at home—instead of ending up unworn, unloved or in a landfill. Maybe it’s time more of us realized that secondhand can be first rate.

← 3 days in Miami
reflections of an urban cyclista, part 3 →