the art & science of healing the planet: geotherapy and Mara G. Haseltine

When something you love is dying, only the most dramatic action will do.

Mara G. Haseltine, an artist and environmental activist, is in love with our oceans and is doing everything she can to help save them. You can read more about Mara, her art and numerous worthwhile projects at www.calamara.com.

Check out this moving video about Mara and her work (from Imagine Science Films, who named her its 2013 Artist in Residence):

Mara grew up immersed in art, science, and activism. Her father, William Haseltine, a biochemist, Harvard professor, inventor and entrepreneur, helped decode the human genome. Mara was one of the first people in the world to see bioinfomatics, the 3D representation of molecular and submolecular structures of the human DNA sequence, through a microscope. That transformative experience—the power and beauty of the unseen world, of the worlds behind our world—still influences much of her work.

Mara’s mother Patricia Gercik, who teaches and writes about Japanese culture and history, grew up in post-war Tokyo, came to the States to attend Berkeley and was active in the feminist movement in the 1970’s before becoming the Managing Director of MIT’s Japan Program.

Mara’s childhood home was filled with Japanese antiques and art, which often draws upon the natural world to tell a story—like this diminutive, playful netsuke from Yale’s Art Gallery that Sebastian Smee recently wrote about in the Globe… 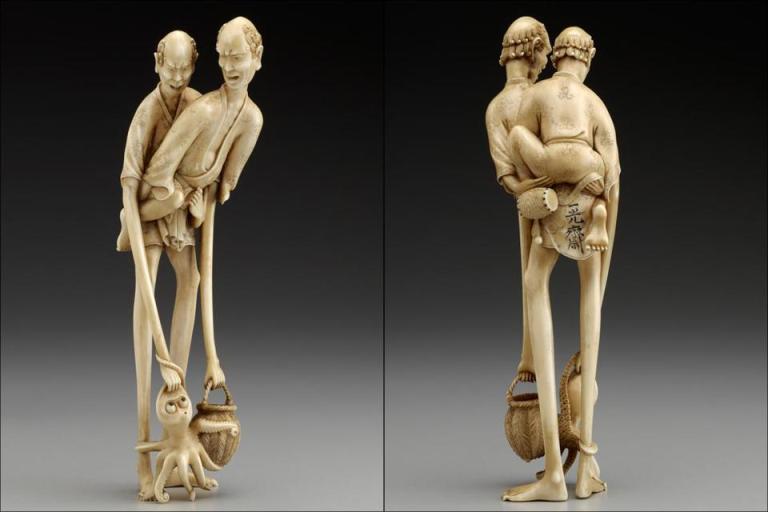 This image makes me think of Mara and her mission. Instead of cooperating to exploit nature, which we’ve done successfully for centuries, let’s join forces to save it. It’s a pretty daunting scenario when you think about all the people who refuse to acknowledge that climate change exists, even as it unfolds around them—or that things aren’t as dire as experts tell us. If science and facts aren’t enough to sway people, then why not art?

Inspired by the principles of Geotherapy, the idea that our cultural evolution effects our biological evolution, Mara’s work fuses art and technology with social change. Her goal to raise awareness about the oceans’ plight through her art has taken a new turn: the creation of the first Geotherapy Institute, currently a work in progress. The school will bring together artists, scientists, and grad students to inspire new research and creative solutions (or therapies) that heal our planet.

As a member of the Tara Oceans crew, Mara visited the world’s most remote and pristine spots—from a Saharan oasis to the southernmost coasts of Chile—to document and verify the effects of climate change.

Studying the specimens she collected on Tara Oceans under the microscope, Mara made a terrifying discovery: all of her samples contained strands of plastic—many intertwined with the plankton itself.

Mara’s inspiration: tintinnid plankton from Chile under the microscope (photo from calamara.com)

In other words, microscopic shards of sunlight-degraded plastic are choking the very life forms that sustain our oceans and thus our planet. Plankton, which provides over 40 percent of our oxygen and removes carbon dioxide from the earth’s atmosphere, is being suffocated by plastic.

Pencil study for sculpture. Mara’s caption from Calamara.com: “Original working drawing for La Bohème, in this case Tintinnids ensnared in a ribbon of UV-degraded plastic.”

There are other forms of ocean pollution besides plastic that cannot be seen with a microscope. Chemical reactions are changing the pH levels of our oceans and causing them to acidify. You can read about this on NOAA’s website.

Yes, you can start freaking out now.

Mara took the images she discovered under the microscope and enlarged them many thousands of times, creating a series called “La Bohème: Portrait of Our Oceans in Peril.” One part features a tenor singing a love song to a magnificent plankton glass sculpture: an aria from Puccini’s eponymous tragic opera, when Rudolfo proclaims his love to Mimi before she dies of tuberculosis. The drama and emotion is all there—and the love.

You can see a performance in this video by Ana Sagatov, starting around the 2:30 mark.

Made entirely of glass, the tragic figure of Mimi, portrayed as tintinnid plankton or “champagne glass for a mermaid” is choking on TB in the form of deadly plastic. Once we see the plankton at eye level, on our scale, do we truly understand how perilous the fate of our oceans is. The microscopic and otherwise unseen and unspoken for becomes beautiful, massive, and impossible to ignore.

Who would have guessed that something otherwise deemed so insignificant would have such an impact on our future? Our fate is intertwined with tiny plankton. We’ll suffocate too, from our own deadly form of consumption, unless we get dramatic.

← reflections of an urban cyclista, part 3
a peace prayer from Boston to Syria →

10 thoughts on “the art & science of healing the planet: geotherapy and Mara G. Haseltine”