a peace prayer from Boston to Syria

Have you been paying attention to Syria’s civil war?

As a Financial Times’ editorial noted last Wednesday, the conflict is now spreading, becoming a regional war as it spills over the border into Turkey.

In my blog post “Syria: fashionable dictator?” I wrote about Vogue magazine’s fawning and disconnected coverage of Syria’s scary first family, the al-Assads, right around the time the country started to unravel in February 2011.

I’ve been wanting to write about Syria again, in particular Syria’s children, because they have been on my mind for some time now—so many of them look like my son.

As we celebrated Mother’s Day yesterday, I thought about how many mothers lose their children to violence each day around the world. In Boston, thousands marched in the 17th annual Mother’s Day March for Peace.

From my home in Brookline, I’ve followed the events in Syria and the fate of its children, as well as the recent Boston Marathon bombings and their extensive, ongoing media coverage.

During that long and awful week of April 15th, I also followed the shameful Senate vote blocking background checks for gun purchases—something the overwhelming majority of Americans say we need—but that the NRA says we do not.

I wondered about the timing of that vote within the context of the bombing and how we as a nation reacted to the events unfolding here in Boston. We did our part and stayed inside on that lock-down Friday, but we certainly didn’t want any guns indoors with us. We have more than enough of that nonsense going on outside. One letter to the Financial Times nailed it after the horrific mass shooting in Newtown: “When everyone is armed we are collectively less safe.” Indeed.

And as John Cassidy wrote in his “Rational Irrationality” blog post for The New Yorker: what would have happened to that Senate vote if the marathon had been attacked by two men armed with automatic weapons instead of bombs? The outcome would have been more lethal, but the country’s reaction would have been more muted, even if the intent was the same.

There seems to be no tipping point when it comes to stopping violence. What will it take?

I lived through September 11th in New York City, and blogged about that too. I’m still processing what happened this year on Patriots Day in Massachusetts. I recognize that the 2013 Boston Marathon bombings are newsworthy because home-grown terrorism, city-wide lockdowns, and massive gun battles on neighborhood streets aren’t supposed to happen in a nice, normal place like Boston. 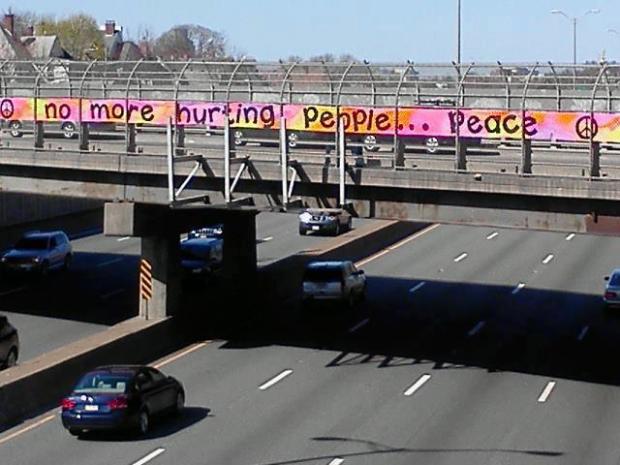 Meanwhile, it looks like Syria, with its recent suspected use of chemical weapons and car bombs in Turkey has tiptoed over Obama’s red line, whatever that means.

Syria’s civil war started out as peaceful street protests, but President-Despot Bashar al-Assad wasn’t having any of that. He learned his lessons from his father Hafez al-Assad, who orchestrated the brutal Hama massacre of some 20,000 people in 1982—a slaughter greeted by silence by the rest of the world.

As in every war and act of violence, the innocent suffer the most. Children in many American neighborhoods live in fear and are stuck indoors. Instead of going to school or playing with friends, Syrian children now work in hospitals alongside adults, among other horrors:

Two years on from the start of the Arab Spring in Tunisia, power is shifting from the old elites to…we’re still waiting to see. Hopefully a moderate, secular form of democracy will eventually take root in places like Egypt and Syria. But: with its people lacking the experience to implement, govern and live in a true democracy, will the Middle East achieve this goal in our lifetime? It’s hard to imagine without the right kind of support from western democracies.

In the meantime, the Arab world seems to be doing everything it can to stifle dissent and creativity, barring simple freedoms, the essential first steps of any democracy, from thriving. TV personality and political commentator Bassem Youssef, the “Jon Stewart of Egypt,” was arrested and questioned by the authorities last month for making jokes about his country’s government—something Americans do freely everyday, on the street and online:

President Morsi: it’s time for you to grow a thicker skin along with a better sense of humor, and focus on real issues. And al-Assad: no more hurting people.

Peace, love, and sports: the game must go on. Savin Hill Little League, where Martin Richard played, with its One Team banner. Image via Dot Art (Facebook)

← the art & science of healing the planet: geotherapy and Mara G. Haseltine
on sleep & productive dreaming →

5 thoughts on “a peace prayer from Boston to Syria”